The building is temporarily closed for maintenance until late fall More 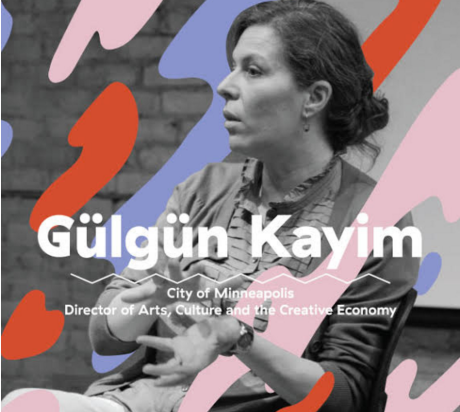 Gülgün Kayim is the Director of Arts, Culture and the Creative Economy for the City of Minneapolis. She spoke at Bring Your Own Business Card, our networking event for creative students last week. Essentially, Gülgün’s work is to facilitate growth and improvement in the creative sector. I had the chance to ask her a few questions about resources and programs she has worked on, and ways that students can learn from them.

Caleb: Could you talk about your work on the Minneapolis Creative Index and in what ways students can utilize that resource?

Gulgun: The report is an economic study looking at the creative sector. What it attempts to do is give us an overall understanding of what’s here, in terms of jobs, and the people that do those jobs. If somebody was interested in coming here and learning about creative activities as a recreational aspect those people can look at that and see how we compare to cities such as New York, LA, Boston, San Francisco, DC, and various other cities. We actually compare very favorably in terms of the amount of activity we have in the creative sector. By that I mean, I’m not listing events, but I am showing people that the ticket sales are great!

There are lots of things you can do. So there is that very basic “I want to do stuff here” and “I want to make sure it is a creative community” how can I engage as an audience member? There is information about for profit and nonprofit activities, what fields are doing well, which fields are not. So if a student is interested in getting into communications, software development, publishing, Minneapolis is a very strong center of that work and it basically shows where the most activity is.

It also shows, in general, how creative jobs do better than jobs in other sectors overall. The creative jobs have been growing at a rate of 10% greater than the other jobs. Also, If we want to break down the creative sector into the various occupations within it, from the traditional to the not traditional, I have broken down the occupations to show how big they are and also to show what people are getting paid and how many people are employed. At the very least it should be a guideline for folks to know, generally, what they should be asking for in their field against other skilled workers, and the problems that we have, because we do have problems here in the creative sector.

And finally, if you want to live in a community that is more creative than others, you will see that the area around the University, the Marcy-Holmes community, and the Dinkytown area have some of the top creative workers. It gives you a general level of understanding of what we have here.

Caleb: I thought it was interesting to take a look at the research of creative occupations broken down into a map of the area and seeing that it is highly concentrated around the University area.

Gulgun: Right! We did two kinds of mapping. The first time we did it we were looking at creative workers per square mile, and the second time we decided to look at, of all the workers in the area how many are creative. That was actually a better way to look at the geography of the city.  This is important for folks who are involved in urban planning and any kind of policy work.

Caleb: You mentioned there are ways to use the report to map certain trends in different industries. I was wondering how you have seen the creative field, as a whole, in Minneapolis evolve in the past 10 years, and how you see it 10 years in the future.

Gulgun: Interestingly enough, one of the other things that I have done is a plan for arts and culture, which looks into the future in 10 years. I recommend that you guys check that out.

Caleb: And this is separate from the CVI?

Gulgun: Correct, and I can tell you about it a little just from a high level. I track and report on the creative sector as a whole. That is one of the things that I do, and the index is an output of that. But I also create projects and programs around the creative sector, and we have something called the Creative City Challenge, which University students should be interested in because we just announced a collaboration with the University of Minnesota.

One project that came directly from the U is a project that looks at un-utilized urban space and the many narratives that are in our community. It asks, “How can we tell these stories about our creative community in these various spaces that are untapped and unused? Or maybe they are used, but you only know one narrative about that space.” That is a bit more complex, and we do that collaboratively with Northern Spark. It is called the Creative City Challenge, my office runs and manages that.

There is another project called Creative City Making, which teams departments in the city of Minneapolis with artists and designers to be thinking partners. This is aimed at eliminating racial disparities in the city. It brings these creative thinkers into the departments to think more intentionally about how we can change processes that the city has to serve communities that are not served well. I hope that gives you a sense of the whole of what I get involved in.

Backing up to your question about change, I think the concept of creativity has gotten more inclusive. Ten years ago, in 2007, people tended to think about the creative sector as basically non-profit work. There more traditional types of activities such as acting, directing, music. But now, I think with the way that audiences are changing and getting more invested in doing it and not just watching it, the whole field is completely changing. It has to change, because people are not interested anymore.

Your generation specifically is not interested anymore in being passive consumers of creativity. You are really interested in being active and engaged consumers, and so it is driving the field to consider what that engagement looks like, even in spaces that are not built for engagement. Then there is the whole other world of media online and the way in which music and various other forms have been driven by online activity. That completely drives how people engage in and see themselves in the creative sector.

So, it has become more inclusive and I think that is super important because it says there is a bigger umbrella under which everyone can be creative. Those particular activities that were traditionally seen as “over there” or “those people” do it are no longer the only way. Inside the index there is a two page spread that shows the creative ecology, and there has been a lot of research that sort of manifests that bigger picture.

To the future part of your question, we did a plan called the Creative City Roadmap, which was a community-wide plan that asked many organizations and individuals in the city. We worked on this for two years and we looked at “what does the future look like?” We found that the future looks like community development, where creativity is more harnessed together.

It involves four goals. One is that the stuff we have in Minneapolis, what is already here, should be amplified more. You may start to see this happening in bigger efforts like bringing festivals together, The Great Northern is one example. The second aspect is to invest in the people that make the work, because the individuals that spend a lot of their time and effort getting the necessary skills to make a living in the creative sector are not always getting paid equitably for that work. That principally is focused on artists of color. Because of the index we found how we compare nationally, and we are below the national average for hiring and pay. That is an issue. Also women, not so much in hiring, but pay levels are still low. Third, is in the way that creativity is a connector. What we looked at was the way in which cultural activities are an ocean that you can swim in for learning and connecting better with each other, especially with people who are not alike or don’t agree. Creativity is a way to do that without exploding or without creating tensions. It is to connect across differences, so we called this out. We said, “This is being done a lot and we should be focused on this in the next ten years.” The last one is community development, how you design houses, how you design the city, how you develop transportation.

All of those elements you need as a framework for your community. We said that creativity needs to be more intentionally part of those assets. So that is a lot of detail, but those are the four areas. Bearing in mind the political climate all of them are relative. Everything we researched, I see relevance in all of them. Ten years doesn’t feel like a lot of time actually to work on these aspects.

BYOBC is a recurring WAM Collective program that connects University of Minnesota students with professionals in the local creative sector. The next edition of BYOBC will take place at the Weisman Art Museum in fall of 2017.

Caleb Vanden Boom is a third year student from Madison, WI in the Graphic Design program at the University of Minnesota’s College of Design. He also interns at WAM as a communications and marketing intern and at local design firm Less Co.

Photo credit Adam Cox This year at WAM, mindfulness is an overarching theme present in exhibitions and programs. Part of mindfulness is self reflection – understanding identity. Of course, this got me thinking. What is identity? The definition may seem fairly obvious, but this word has certain nuances because identity is constructed in a different…

Internationally renowned artists visit Minneapolis, focus on reviving and enriching Mexican traditional art forms In celebration of Latinx Heritage Month, the City of Minneapolis Office of Arts, Culture & the Creative Economy and the University of Minnesota’s Weisman Art Museum will host a Mexican Folks Arts Residency to strengthen and elevate the presence of and…

This July in the Edith Carlson Gallery, WAM opens State Your Intentions: New Works in the WAM Collection. The exhibition showcases not only notable recent additions to the collection but also the intentionality of WAM’s collecting practice. In 1981 when Lyndel King became the director and chief curator, she openly asserted her resolve to…